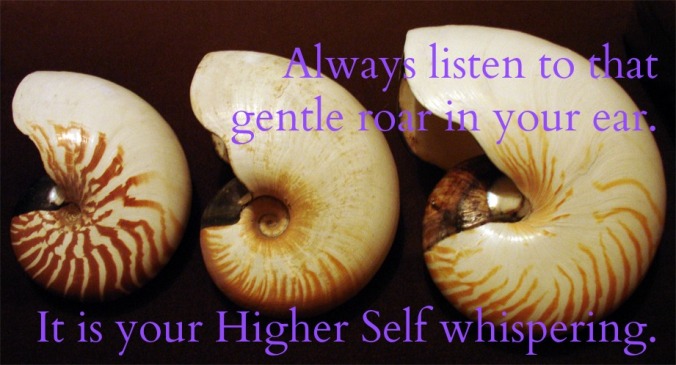 There is something about the chambered nautilus shell that has always grabbed my attention.  It beckons to my intuition.  It inspires me to think in a new way . . . to be creative.  It speaks to me and tells me to listen to my Higher Self.

This is a lot of powerful talk for a shell.  I did some reading about the nautilus shell and it turns out that my intuition is, not surprisingly, extremely astute.  This shell speaks volumes and represents Sacred Geometry.

It turns out that Sacred Geometry is pretty cool stuff and its geometric codes are used to describe the basic building blocks of the universe.  When you think about this, you wonder why, like arithmetic, algebra, and basic geometry, we don’t learn more about Sacred Geometry when we are in school.  We memorize our addition and multiplication tables and learn about quadratic equations and figure out how to find the volume of a cone, so why isn’t there a class called Sacred Geometry in the school catalogs?

Here is a blurb that I found online about this shell:

“The main feature of the Nautilus is the large snail-like shell that is coiled upwards and lined with mother-of-pearl. The shell is subdivided into as many as 30 chambers. As the shell grows, its body moves forward into the new larger chamber and produces a wall to seal off the older chambers. The empty chambers are used to regulate buoyancy. A cross-section of the shell of the Nautilus will show the cycles of its growth as a series of chambers arranged in a precise Golden Mean spiral.

The Golden Mean is represented by the Greek letter phi, (with the decimal representation of 1.6180…) is one of those mysterious natural numbers that seems to arise out of the basic structure of our cosmos. Phi appears regularly in the realm of things that grow and unfold in steps just as the Nautilus shell grows larger on each spiral by phi.

With each revolution completing a cycle of evolution, the Golden Mean Spiral is symbolic of life’s unfolding mysteries. The continuous curves of the spirals, which are feminine in nature, and the ratios between each of the chambers reveal the intimate relationship between the harmonics of nature and Sacred Geometry.” http://2muchfun.info/nautilusshell.html